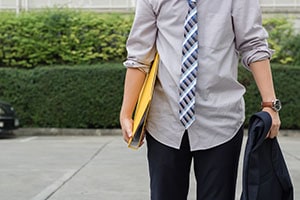 If you earned enough wages to qualify, your eligibility for unemployment benefits in Georgia is typically determined by the reason for your separation from employment. If you were separated due to lack of work (i.e., layoff, business closure), you will generally be eligible for unemployment benefits. However, if you were separated for other reasons, a Claims Examiner from the Georgia Department of Labor will investigate whether you were separated due to your own fault. If your former employer claims you were fired for failure to follow rules, orders or instructions, or for misconduct on the job, you will generally be denied unemployment benefits. Likewise, if you quit your job, you will generally be denied unemployment benefits unless you can show that you quit for a “good work-connected reason”. Examples of good work-connected reasons include material changes in working conditions or pay, nonpayment for work, or being required to violate the law. You will not be eligible to draw benefits if your reason for quitting was personal.

After you apply for unemployment benefits, you will receive a written Claims Examiner’s Determination in the mail typically within about two to three weeks. If you are denied benefits, you will have fifteen days from the date of the Determination to file a written request for an appeal. If you are approved for benefits, your former employer may appeal within the same fifteen-day period. If either party appeals, the Georgia Department of Labor will typically schedule a telephone hearing within two to three weeks. If you win your appeal, you will begin receiving unemployment benefits retroactive to the date you applied. If your former employer wins its appeal, you will not only stop receiving unemployment benefits, but you will also be required to repay any benefits previously received.

The appeal hearing will be conducted by an Administrative Hearing Officer and is like a mini trial. Both sides may be represented by counsel. We highly recommend that you retain an experienced attorney, such as the Atlanta unemployment appeal lawyers at Fidlon Legal, to represent you for your appeal hearing. During the hearing, you will be given an opportunity to testify under oath, call witnesses, and introduce documents and other evidence into the record of the hearing. Your former employer will have the same opportunity. If you are represented by counsel, your attorney will conduct the hearing, including questioning you and your witnesses, introducing evidence, cross-examining your former employer’s witnesses, presenting legal objections, and making a closing argument.

The initial appeal hearing is the most critical time in the process to have an attorney. It is the only opportunity for you to “have your day in court”. In other words, the hearing is your sole chance to present all testimony and evidence that you want the Georgia Department of Labor to consider regarding your claim. It is also the time when your former employer must present all of its testimony and evidence in an effort to meet its burden of proof. Once the hearing is over, the record in your case is closed. If you forget to present certain facts or evidence during the hearing, you will be unable to re-open the record and submit it after the fact. If you lose the hearing, you may appeal further to the Georgia Department of Labor’s Board of Review, and again by filing a Petition with the Georgia Superior Court. However, these appeals are not fact-finding hearings and are very limited in scope. That means they may be very difficult to win, particularly if you were not represented by counsel during your initial appeal hearing and you failed to present a complete factual record, or to object to improper evidence presented by your former employer. It is therefore critical to have a skilled advocate represent you during your initial appeal hearing. If you have an upcoming unemployment appeal hearing and are considering legal representation, please contact the Atlanta, Georgia unemployment appeal attorneys at Fidlon Legal for an initial case evaluation.