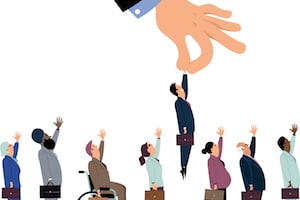 To be illegal, the discrimination must be based on one or more of these “protected categories.” Otherwise, employees are not generally protected from discrimination, however unfair or unethical it may seem.

For example, if your boss is much harder on you than anyone else for no apparent reason, while it might be unfair or unethical behavior for a boss, it is not prohibited by law. But if he or she is extra hard on you for a reason that is protected by law, such as your age, race or sex, then it is illegal discrimination, especially if you suffer damage such as being passed over for a well-deserved raise or promotion.

Unlawful discrimination can occur in any aspect of employment, including:

Discriminatory practices also include harassment or a hostile work environment based on age, race/color, gender, disability, national origin or religion.

If you believe you were subjected to unlawful discrimination, you should act quickly. In many cases, you must file your claim with the Equal Employment Opportunity Commission (EEOC) within 180 days of the last discriminatory act in order to preserve your rights. We recommend that you contact the Atlanta, Georgia employment discrimination lawyers at Fidlon Legal as soon as possible. An experienced Atlanta employment discrimination attorney may be able to assist you in ending the unlawful practices, preventing your employer from terminating you, or, if you have already been terminated, negotiating an acceptable severance package.

The Age Discrimination in Employment Act

The Age Discrimination in Employment Act of 1967 (ADEA) protects individuals who are forty years of age or older from employment discrimination based on age. The ADEA applies to employers with twenty or more employees, including employment agencies and labor organizations, as well as federal, state and local governments.

The ADEA’s protections apply to both employees and job applicants. Under the ADEA, it is unlawful to discriminate against a person because of his/her age with respect to any term, condition or privilege of employment, including hiring, firing, promotion, layoff, compensation, benefits, job assignments and training.

It is also unlawful to retaliate against an individual for opposing employment practices that discriminate based on age or for filing an age discrimination charge, testifying, or participating in any way in an investigation, proceeding or litigation under the ADEA.

Remedies for violation of the ADEA include:

Title VII of the Civil Rights Act of 1964 (Title VII) prohibits discrimination against employees, former employees and applicants for employment with respect to their compensation, terms, conditions or privileges of employment based on their race, color, gender, sexual orientation, transgender status, national origin or religion. The Pregnancy Discrimination Act amended Title VII to prohibit employment discrimination on the basis of pregnancy, childbirth or related medical conditions. Title VII covers employers with at least fifteen employees.

Compensatory damages are allowed for future loss, emotional distress, pain and suffering, inconvenience, mental anguish and loss of enjoyment of life. In certain cases, punitive damages may be awarded to punish employers and deter them from intentionally violating the rights of other employees. Caps are placed on the combined compensatory and punitive damages according to the size of the employer. These caps are as follows:

The Americans with Disabilities Act of 1990 (ADA) prohibits private employers, state and local governments, employment agencies and labor unions from discriminating against qualified individuals with disabilities in job application procedures, hiring, firing, advancement, compensation, job training, and other terms, conditions, and privileges of employment. The ADA covers employers with fifteen or more employees. The ADA’s nondiscrimination standards also apply to federal sector employees under section 501 of the Rehabilitation Act.

Under the ADA, an individual with a disability is a person who:

Like Title VII, the ADA also prohibits employers from retaliating against an individual for opposing employment practices that discriminate based on disability or for filing a discrimination charge, testifying, or participating in any way in an investigation, proceeding, or litigation under the ADA.

The remedies for violation of the ADA are the same as those for Title VII.

Whether your claim is for disability discrimination or failure to provide a reasonable accommodation for a disability, the attorneys at Fidlon Legal can help you. Please contact our Atlanta employment discrimination law team for an initial case evaluation.

The Equal Pay Act of 1963 (EPA) protects men and women who perform substantially equal work in the same establishment from sex-based wage discrimination. The EPA does not have a minimum threshold number of employees for coverage.

Depending upon the jurisdiction, state and local fair employment laws may exist which impose different, and often stricter, requirements. In Georgia, public sector employees are protected by the Georgia Fair Employment Practices Act, which prohibits discrimination based on race, color, religion, national origin, sex, handicap, or age. Employees within the City of Atlanta are also protected by the Atlanta Human Relations Code, which prohibits discrimination based on race, color, creed, religion, sex, domestic relationship status, sexual orientation, national origin, gender identity, age, and physical disability. The Atlanta employment discrimination lawyers at Fidlon Legal are experienced at handling discrimination claims under these state and local laws.